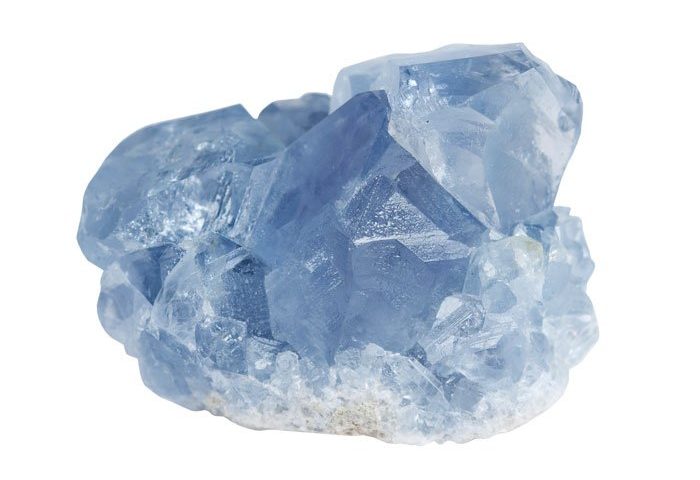 CELESTINE STONE: ITS HISTORY, ORIGIN AND COMPOSITION, AND ITS LITHO THERAPEUTIC PROPERTIES

Celestine has its origins in Madagascar. This stone was discovered in 1797 by Martin Heinrich Klaproth, a German chemist and mineralogist. The following year, in 1798, the stone was christened Celestine by Abraham Gottlob Werner, a German geologist and mineralogist. Notably, he established a classification system and an inventory of all minerals and stones. Abraham Gottlob Werner selected this word in relation to the stone’s blue colour which is reminiscent of a sky blue, the colour observed in the first collected samples. Its name comes from the Greek Latin word coelestis which literally means heaven. The name Celestine is also linked to the Latin word caelestis which means “What comes from the sky” On Saint Celestine Day we honour Peter Celestine who became pope in 1294. But he remained pope for one year only, preferring a more solitary life. Celestine stone is also known as cliftonite, Coelestine, colestine, dioxynite, eschwegite, schutzite and sicilianite. It is also known under the name strontian sulphate.

In antiquity, celestine stone was considered to have strange powers. In this regard, it is highly valued by alchemists and magicians. At that time, knowledge on this stone was kept for practitioners of mystical knowledge and occult sciences. As such, this stone has long remained a mystery to the uninitiated. The Romans knew Celestine by Aqua-Aura, a name that is now given to a stone that is made artificially. Celestine stone was used either in its solid form, as a stone, or as an essence or elixir. Lastly, Celestine was used in powder form. Its wide distribution around the Mediterranean basin has made it known to many. It has therefore been widely used. Celestine could be found before the 18th century in Italy, Sicily, Switzerland, England, Morocco and Tunisia. Today and in France in particular, Celestine or the “Stone of Angels” is known for its many virtues, notably for providing peace and relaxation. Celestine stone is indeed widely used in litho therapy.

Origin and Composition of Celestine Stone

Celestine, also termed celestite, is a stone that is naturally composed of strontium and sulphur. This stone belongs to the sulphate group. Celestine stone, owing to its structure, is isomorphic with barium. Strontium, which is from the alkaline-earth family, creates a solid solution with barium but also with anhydrite or calcium sulphate. Celestine, comprised of a 183.69 g/mol molar mass, and of an orthorhombic system, is often colourless, occasionally white and features many pale and light blue shades. Celestine is associated with blende, galene and other sulphides. Celestine stone was initially found at the bottom of volcanic rocks. These rocks are then filled with strontium hydrothermal solutions. Celestine belongs to the orthorhombic crystal system, one of seven crystal systems that classify minerals in relation to their symmetry. Celestine is a fairly plentiful natural stone. It is characteristic of evaporites, which are rocks made up of mineral salts. It is a mineral with a rather dense structure and is fibrous like barium. This stone contains impurities which are often blue-green, light red, brown, brown-red or yellow due to the presence of sulphur. It is also common in hydrothermal environments.

More broadly, celestine stone is a natural mineral that is dispersed within sedimentary rocks. It can be found in dolomites, limestone or sandstone. As part of the sulphate group, Celestine forms a rock mass of evaporites. It can therefore be observed in the form of crystals on calcite, dolomite or on aragonite. These crystals usually have the shape of an elongated prism or a flatter shape. Sometimes these crystals can take the form of plates. However, this form is rarer, and is indeed the most-sought-after. Celestine stone also appears in the form of geodes or nodules, within sedimentary formations. Celestine is also available in the form of small stones. The largest celestine deposits are found in Germany, England, Austria, The United States, France, Canada, Italy, Madagascar, Libya, Mexico, Poland, Tunisia, Slovakia or Russia.

Celestine stone is recognised for its psychological benefits. Indeed, celestine has a strong energetic power. Celestine, also called celestite, is a soft stone that is perfect for children and vulnerable persons alike. Its primary quality is to provide calm but also comfort. Its soothing action is especially recommended for small children and babies who may be anxious. It calms and comforts. Celestine stone provides children a sense of security. It greatly soothes the user. It also frees you from oppressions or constraints. Moreover, through its effect on the lungs and rib cage, celestine stone reduces anxiety. Celestine also helps you to overcome feelings of worthlessness or helplessness. It allows you to regain self-confidence. Celestine’s calming quality helps you to find peace, serenity, and makes you more able to help others.

Celestine is also a creative natural stone. It is particularly useful in the arts. It promotes imagination, aiding the development of artistic creation. Its energy helps you to reduce feelings of nervousness or tension. In addition, Celestine stone is useful for stimulating communication and insight. Indeed, its colourful rays allow you to open the throat chakra, helping you to solve communication problems. Celestine stone also ensures peace and harmony. It strengthens friendships and romantic relationships. This helps you to avoid conflicts. Celestine is a natural stone that dissipates pain and offers love.

Widely used in meditation, celestine stone offers wisdom, spiritual peace, and enlightenment thanks to its high vibration. Celestine connects the user with their cosmic consciousness. Celestine reignites spiritual consciousness. It is an essential stone in the search for a sense of union with the universe. Celestine promotes insight, allowing one’s mind to remove the burdens that prevent self-fulfilment. Finally, celestine stone aligns the chakras. If placed on the third eye (sixth chakra), it puts universal energies in union with divine forces, offering you inner peace.

Celestine is a natural stone that has many virtues for mitigating physical ailments. It regulates the body’s needs. Thanks to its energetic power, celestine stone helps to treat hearing or visual problems. Indeed, it improves vision. It can aid the thyroid. In addition, the soothing effect of celestine stone relaxes the muscles. It relaxes the back muscles in particular. Its energy slows down tissue aging. Celestine also contributes to the removal of nodules in organs and tissues. It also helps the lungs in their proper functioning. It aids respiration and regulates the lungs. Celestine is a very effective stone for aligning the chakras, to rebalance them. Associated with the throat chakra (fifth chakra) celestine is a natural mineral that heals disorders related to this organ. For example, it accelerates tissue regeneration after a tonsil operation.

In addition, celestine stone, thanks its relaxing properties, can also be used to soothe period pains or headaches. Celestine can also treat infertility disorders. Finally, Celestine has a unique ability. It acts directly on the cells. It aids them in their regeneration. Celestine repairs natural tissue bonds that have been broken or undone. In this regard, celestine promotes rapid healing of an injury and aids cellular repair. Celestine stone therefore has many psychological spiritual, spiritual and physical benefits. It aids well-being and offers serenity and calm thanks to its relaxing, calming power.

Subscribe to our newsletter and receive our advice on stones and minerals as well as our promotions, previews and good deals